What Everybody Ought to Know About the Tera2 PCoIP Chipset!

Everyone is always looking for the latest and greatest when it comes to technology. It was no surprise to us that when the brand new second generation Tera2 PCoIP chipset was released, it caused quite the commotion among the VDI Marketplace. For those of you who are not familiar with what the Tera1 or Tera2 PCoIP Chipsets are, they are Zero Client portal processors made by Teradici that is used in our new V1200 unit and also in the first generation model, the V9000. (For more on the portal processors click here..) Teradici's chipsets have been nothing short of innovative, starting with the original Tera1 chipset. They brought the spotlight back onto the world of Zero Clients, providing a processor that allowed a unit to not have any centralized storage, but that is able to produce a high end graphics display which is the only Zero Client that is successfully able do so. (Click here for more on Zero Clients..)This new generation of chipset allows for new features and new flexibility for the virtual desktop, remote workstation, and other hosted desktop solutions, what more could you ask for? What's The Difference Between The Tera1 and Tera2? With every new product that comes out in today’s world peoples initial question is, what are the upgrades? Upgrades to the Tera2 chipset made the new generation far more feature rich, than its previous model. The Tera2 has higher performance web graphics, optional quad monitor, its the first PCoIP Zero Client to have wireless capabilities, client side caching (a feature the V9000 did not have), and is more energy efficient. It uses 50% less bandwidth than a Tera1 chip-set, and 5x the performance! Let's go into a bit more detail to provide a better view at just how much better this new chipset is. The Tera2 has enhanced graphics performance allowing for a maximum resolution in a dual monitor environment to be 2560x1600 which is a large jump from its predecessor which supported 1920x1200, thus allowing for a larger screen to be used. Its image performance is unparalleled offering 50 Mpps for a VDI environment or 300 Mpps in a workstation environment. One of the most anticipated upgrades for this unit is its quad monitor capability, offering the ability to use up to four monitors without having to compromise on the resolution quality. As previously stated the one unique trait that truly sets the two generations apart is that the Tera2 unit supports client side caching meaning that when streaming information or a video it will cache the multimedia so as to prevent lag and jumps in the network. 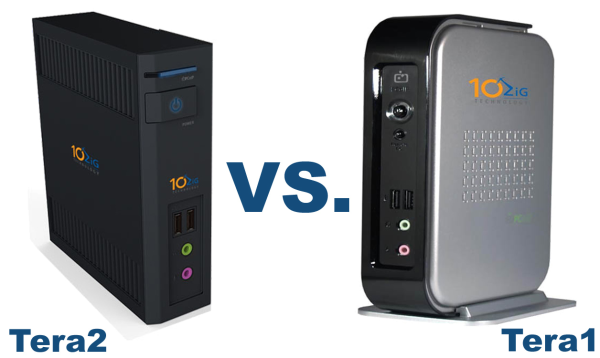