June 03, 2015
Developing a Viable Proof of Concept (POC) of a VDI
Effective collaboration on POC strategic design, thorough planning, and diligent attention to assuring that all requirements have been met to affect optimum VDI—prior to roll out of virtual desktops to users—can ensure that everything that can be done has been done to execute smooth implementation and to achieve a satisfactory long-term experience for your company's virtual desktop users. Find out more.
Read More
May 29, 2015
8 Pieces of Sci Fi Tech That Will Soon Be Real 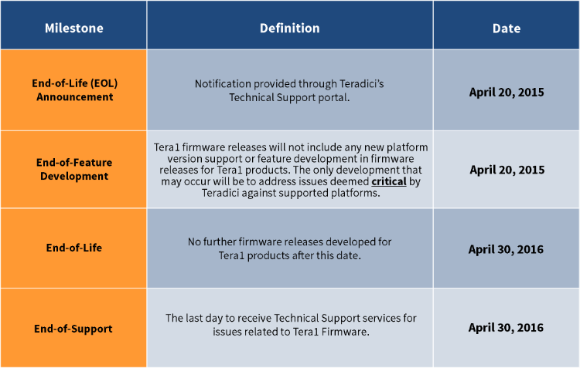 The Tera1100 Processors will no longer support future VMware Horizon Releases after 5.3.
Read More
December 17, 2014
Hosted Desktops with Thin & Zero Clients a Match Made in Heaven

In summary Thin & Zero Clients provide the best possible performance in a hosted desktop environment while all but eliminating the TCO of the desktop itself, compared to that of a high maintenance PC.  Isn't that the point of moving to hosted desktops, high availability, reliability, and improved end user productivity.
Read More
October 27, 2014
Thin Clients vs. Zero Clients for VDI | 10ZiG Technology
By illustrating the differences between Thin Clients and Zero Clients I hope to better define them as well.  Both are small form factor, solid state computing devices, specifically designed for a server based typology, currently generally associated with Desktop Virtualization (VDI) and Host Desktop Environments (DaaS), but they have many different characteristics that are important to distinguish. Below we will discuss the key differences between Thin Clients and Zero Clients.
Read More
October 24, 2014
10ZiG Host Card Workstation Solutions FAQ
What is a TERA2220/2240 host processor? 10ZiG's powerful host processors enable you to move your Windows or Linux workstation into the datacenter and connect with a PCoIP zero client remotely without impacting application performance. Created for IT managers who are looking for an easy-to-manage, reliable, and secure solution to meet the needs of designers who have dedicated computers with graphically demanding applications and expect the highest in performance. What types of...
Read More
September 09, 2014
The Game of Devices: Will Mobile or Tablet Usage Ever Surpass Desktop?
In our new interactive tool, we’re tracking the epic game of devices across 10 websites to see if mobile or tablet usage will ever overtake desktop online. Find out who will win, if anyone, in the Game of Devices. What does it mean? The age of the smartphone has looked like it is just over the horizon for years now, but it never quite seems to dawn. Desktop computing, with its...
Read More
September 03, 2014
The Pros & Cons of BYOD in Today's Growing VDI Environment
When the PC was first introduced in the late 70s, it took the business world several years to acknowledge it as a real business tool. In fact, it was called a home computer for the first few years, relegated to a simple toy. Likewise, it has taken business several years to see the smartphone and other mobile devices for what they are. However, these devices now provide the momentum for what...
Read More
July 24, 2014
8 Pieces of Wearable Computing You'll Want To Get Your Hands On

8 Pieces of Wearable Computing You'll Want To Get Your Hands On
Read More
June 09, 2014
The Value of Thin Clients in a DaaS or SaaS Environment
Back in the day, long before the internet became a household word and even before "personal computers" even existed, if you used a computer, the odds are you actually were using a terminal connected to a server somewhere. While the concept of "client/server" computing may seem like a new concept, it has actually been around for decades. That's because each terminal connected to a server is, in concept, a client.
Read More