About Us
Cutting-Edge Thin & Zero Clients

endpoint devices for VDI and Cloud.

Click on image for tour of 10ZiG via interactive product brochure. 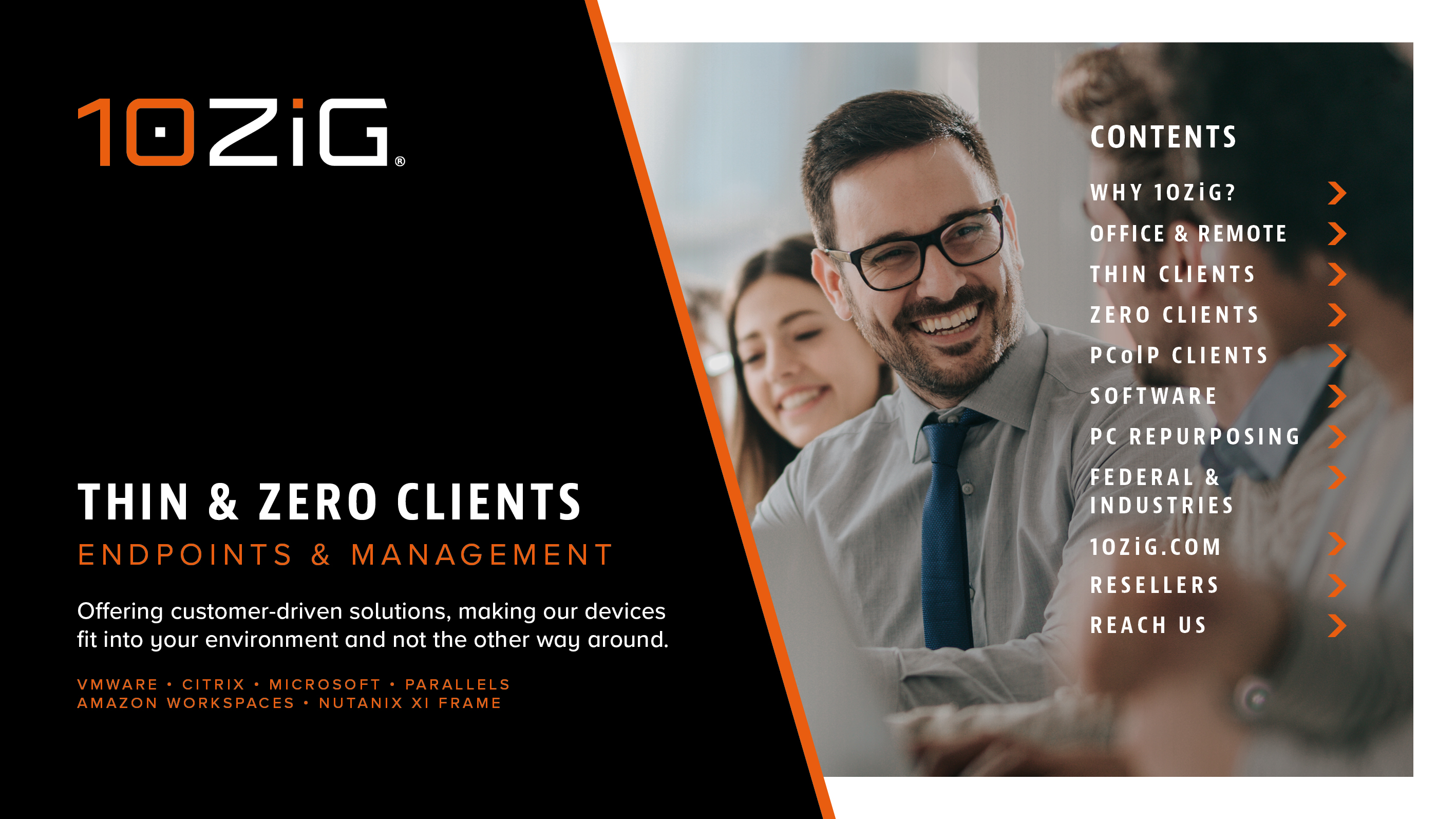 A truly unique level of personal service and customization that is a rare find in the industry.

10ZiG Technology is a leading provider of endpoints for a Virtual Desktop Infrastructure environment. Our fast and reliable hardware is VMware, Citrix and Microsoft ready and designed to handle all ranges of usage - from task-based to sophisticated CAD/CAM users.

10ZiG prides itself in being one of the only companies whose sole focus is in Thin Clients and Zero Clients for VDI. This focus allows us to provide a truly unique level of personal service and customization that is a rare find in the industry. We offer a multitude of custom embedding options and hardware configurations to ensure our devices are tailor-made to fit seamlessly into the environments of our customers.

The long-standing partnerships 10ZiG has with industry leaders such as VMware, Citrix and Microsoft are all with the aim of providing the best performance possible by supporting the full feature sets of acceleration protocols such as HDX, HDX Premium, HDX 3D Pro, PCoIP, Blast Extreme and RDP. 10ZiG offers traditional dual, triple and quad Thin Clients and Zero Clients, including the widest range of TERA2-based PCoIP devices on the market..

The Story Behind the Name

10ZiG Technology looked to one of Time Magazine's 100 most influential people of the 20th century when the company decided to change its name from BOSaNOVA in 2009.

When the thin client specialists were debating its new identity, they wanted to come up with an inspirational name that represented the high levels of performance that its thin client and zero client products provide.

Tenzing Norgay, or as he is better known, Sherpa Tenzing is one of the most famous climbers in history. He was one of the first two individuals known to have reached the summit of Mount Everest, which he accomplished with Sir Edmund Hillary on 29th May 1953.

This name stood out from a list of names provided by a corporate branding company, as well as holding a special interest for 10ZiG CEO, Martin Pladgeman, who is an avid reader of British History and that of the Commonwealth.

10ZiG not only champions being the first and being innovative, but it also defines the company as one that places much of its emphasis and importantance on support, just as Tenzing Norgay supported Sir Edmund Hillary in his journey.

Andy Martin, Managing Director at 10ZiG Technology, said: "The Company was founded in 2003 and is headquartered in Phoenix, Arizona. When we changed the name to 10ZiG after the great Nepalese Sherpa mountaineer Tenzing Norgay, we were able to start thinking about linking our new products in order to give them relevance to the name.

Time Magazine's 100 most influential people of the 20th century.

"For Instance, the series of zero clients launched in Las Vegas all had the prefix '8848' - this refers to the height of Mount Everest in meters."

10ZiG Technology is committed to providing its customers the very best in support from start to finish - beginning with their initial proof of concept through to the rollout of their production units and ultimately the ongoing support of those units through their life cycle.

While some technology companies focus only on blazing a trail forward while leaving some of their customers behind, 10ZiG takes pride in making sure its customers are brought along the trek as technology progresses, and while 10ZiG continues to push forward with award winning innovation.